Additional race information can be found at https://tromptownmarathon.com/.

We will be moving to the fall on a Sunday morning, September 25, 2022. The runs will include the half-marathon and the addition of a full marathon.

COVID has led to a transformation, after 43 years, to the Tromptown runs. The name, date and times have changed and another run has been added, the full marathon. The two runs are some of New York State's, if not national, most challenging and yet scenic courses.

The half-marathon course, of 43 years, remains the same, but with new start and finishing lines. It includes circling the lake, then the continuation of the sights, sounds, and smells of fresh country air intensify as you leave the dam near the half-way point. As you head south for the finish line the views unfold of the valleys and the village to the east.

The marathon takes in the first 12.1 miles of the half-marathon course before turning south, then east at about the 17 point. Beginning around the 20 mile point one heads northwest and gradually ascends to Tromptown's own but short "heartbreak Hill". From 22-25 miles one is heading west, finish line bound, descending with the wide panoramic view of three valleys and their surrounding hills. The last mile is level in the village.

Both courses are loop courses. They start very near the finish line in front of the school. Both are certified. With the new marathon course and moving the start and finish lines of the half-marathon new certifications for both were required.

The two runs will help to support various community endeavors.

Special awards to the top men and women finishers of each run! 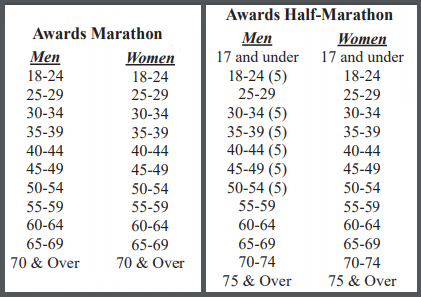 The History of the Tromptown Run

The village of DeRuyter in central New York State was originally called Tromptown. Jan Lincklaen, an agent for the Holland Land Co., whose territory included Cazenovia and areas south, named it. In the winter of 1653 the British had clamped an airtight blockade on the Dutch coastal cities causing serious shortages and the resulting hunger riots caused the Dutch Admiral Marten von Tromp to attempt to break the blockade. On July 31, 1653 the Dutch lost 4,000 men and 13 ships in the battle. Tromp was killed and Admiral Michiel de Ruyter was now in command. In the years following the British navy was strengthened in readiness for a second Dutch war. However widespread corruption and waste and eventually the bubonic plague in the summer of 1665 causing the death of nearly 100,000 in London gave the Dutch a chance to rebuild their fleet. In June of 1667 Admiral de Ruyter sailed up the Thames river, shelled London, destroyed many English warships and captured the British flagship the Royal Charles. De Ruyter was now a hero and Jan Lincklaen being one to "run with the tide" changed the name of Tromptown to DeRuyter and so it remains today.To learn more about DeRuyter and the area visit the DeRuyter-On-Line site.

A "voyage of discovery" was initiated between our village and the Netherlands because no other village, town or city in the world is known to bear this name. The ship Admiral DeRuyter of the NATO fleet designated DeRuyter as their "Flagship Town" in 1982. In April of 1982 the Royal Netherlands Marine Band and members of the Dutch Navy and diplomatic legations of New York and Washington came to our community for two days of celebration in recognition of 200 continuous years of Dutch-American diplomatic relations. The Indian name Tioughnioga (tie-oth-nee-o-ga) means "meeting of the road and waters" or more poetically "a bank of flowers" was given to our local river and lake and to our excellent volunteer fire department. Both our fire department and village serve a greater area community with an unusual variety of businesses, services, churches, organizations and one of the smallest central school systems in the state. Local activities range from hang-gliding, snowmobiling, skiing and water sports on the lake. The DeRuyter Firemen's Fair is one example of the total community involvement in such activities.

In 1888 horse-trotting races became a popular event and a track and grandstands were built. Precedent for the Fair was set by Sig Sautelle's Circus, which wintered and trained in DeRuyter from 1896 to the early 1900's. In 1908 the first four-county fair, Cortland, Madison, Chenango and Onondaga, was the immediate forerunner of the present Firemen's Fair which was started in 1927. The grandstand and racetrack are gone and 2-legged runners, the Fair's major opening night event, have replaced the 4-legged ones.

Over three decades ago, Steve Camelbeek, a local teacher, track coach and volunteer fireman decided to initiate a cross-country race as part of the Firemen's Fair program. Win Skeele, a local businessman and former teacher entered and came in last of the 24 runners. Since then Win has gone from participant to director and the Tromptown Run has become a full-fledged running event. The distances were first measured by automobile as 3, 6, and 13.2 miles. However the "too fast" times prompted us to investigate and accurately re-measure the distances as 2.7, 5.86 and 12.7 miles. Oops!!

As the number of runners went from tens to hundreds, the starting line was moved to the school athletic field on grass and the distances were changed to 3 miles, 10 KM and 13.2 miles. The perilous turn at the finish on loose gravel and the need to conform to international standards prompted us in 1982 to change to standardized distances of 5 KM, 10 KM and Half-Marathon and with no gravel turn at the finish. This required revised measurements and certification, three different starting times and lines, revised mile markers, more workers and a lot of work.