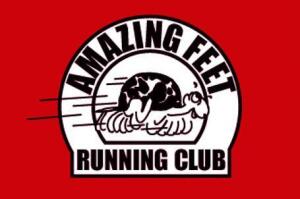 Our club has about 120 members that mostly reside in the Morris, Somerset, and Union County areas of New Jersey. We are a very diverse group ability-wise, age-wise and gender-wise. Some members went from the couch to their first 5K after joining our club. Others are experienced marathoners, cyclists, and triathletes. We even have a few of those special folks who are Ironman finishers. We are non-competitive when running as a group and there is no pressure to "keep up with the pack". Everyone is welcome and no one runs alone. On any given day, if you want to run 5 miles, 10 miles or 20 miles, there will be someone doing the same and available for you to run with.

We schedule weekly group runs for members of all running abilities.  Our Saturday morning runs are held in Morristown's Loantaka Park, opposite 467 South Street, Morristown, 07960. The main group starts out at 8:00 AM running various distances, but some folks start at either 6:00 AM or 7:00 AM to run a 5 or 6 mile loop beforehand. They return to the park in time to join the core group of runners at 8:00 AM.

We also schedule an 8:00 AM Sunday run. The Sunday run generally starts at School Street & Willow Avenue in Peapack, but at times alternate locations are also scheduled.

We generally get together for a post-run stop at a nearby deli or bakery.

There are various weekday run options as well.

New memberships starting on or after September 1 will be extended to the end of the following year.