The Holland Haven Marathon has grown in importance and size since it was first started. Due to this growing importance this report determines the economic impact the Holland Haven Marathon has on the local economy. This inflow of money that would not have otherwise been spent in Ottawa is very beneficial to the local economy. Consisting of Full Marathon, Half Marathon, and 8k Race the event attracted around 1050 participants with 76 percent of runners coming from outside the area as estimated to be non-local participants. (A runner is defined as local if they reside in Ottawa County, MI.)

One of the largest economic drivers came from non-local participants who spent $313,000 in the local economy. The regional econometric input-output model, which estimates how spending spreads through the local economy, estimates that non-local participant spending created an additional $77,600 for a total spending impact of $390,600. Including non-local guests and local import substitution, which determines how much “local” money stayed in the local economy, the total spending impact was almost half a million dollars. Industries that received the highest amounts of spending were hotels, restaurants/bars, and car rentals. As a result of this spending, incomes of local residents increased by roughly $150,000 and created an employment impact of the equivalent of 5.48 full-time equivalent jobs. The summary table below organizes the estimated economic impacts of the 2019 Holland Haven Marathon on the local economy. 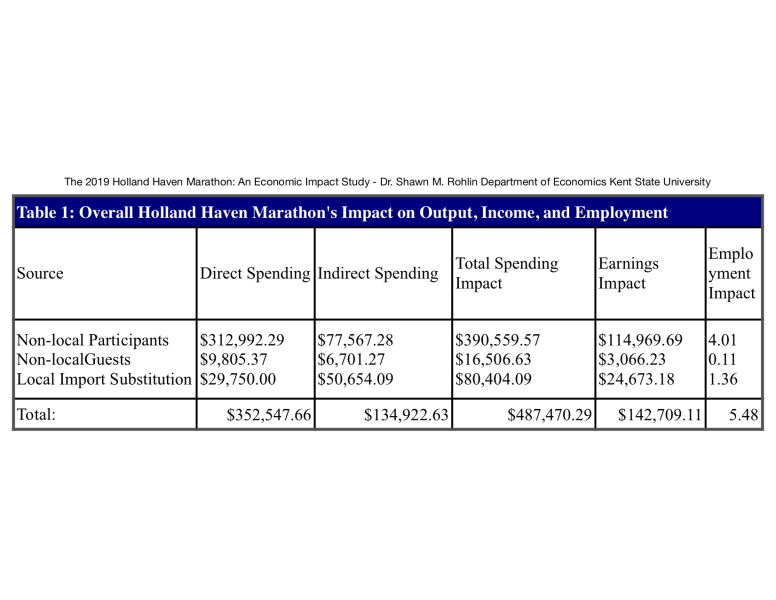