Alexander, our wonderful local photographer, took some great shots at the event. You can view the photos HERE

Feel free to share and tag yourself and your friends!

Congratulations to all who finished the 10K, 5K, and Fun Run!!

Thank you to J&A Racing who did the chip timing for this race.

The Victory YMCA presents the 5th annual Victory at Yorktown races, with a NEW 5K in addition to the 10K and 1 Mile Fun Run! These historical and scenic races begin on the Waterfront of historic Yorktown. Run past landmarks such as the Yorktown Victory Monument, Cornwallis' Cave, and Surrender Field. The 10K is USATF Certified (VA-16011-RT) and is a CRR Grand Prix event and a Hampton Roads Super Grand Prix event.

Enjoy FREE family fun! Bring the young ones for Healthy Kids Day from 8:30AM - 11:30AM. It will feature fun, active play and educational activities, some with a Revolutionary theme. Kids ages 13 and under who participate in the Fun Run will receive a free scoop of ice cream from Ben & Jerry's.

T-shirts are guaranteed to everyone who registers by March 21.

All proceeds go to the Victory YMCA. Your support helps us strengthen our community and keep families healthy- thank you!

Packet pickup will take place at the Victory Family YMCA (101 Long Green Blvd., Yorktown, VA 23696) on Friday, April 5 from noon until 6:00PM. You may pick up another person’s packet with a copy of an email or note saying you have permission.

Easily sign up using the button at the top of the page.

Alternatively, for no service fee, you can register in person at the Y or print and mail the form (below) to: 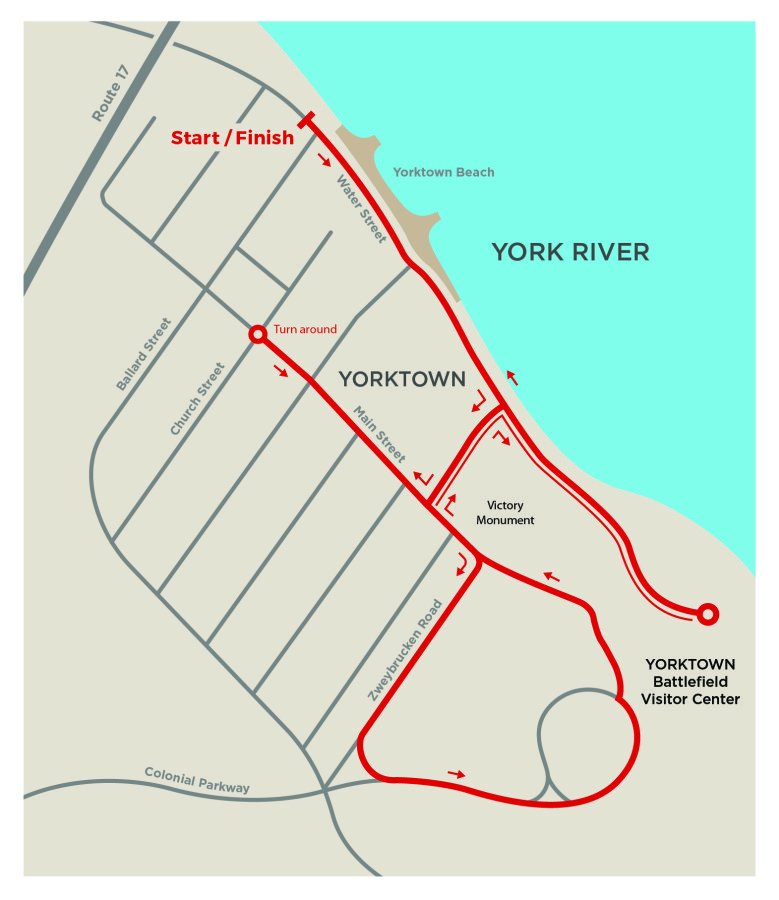 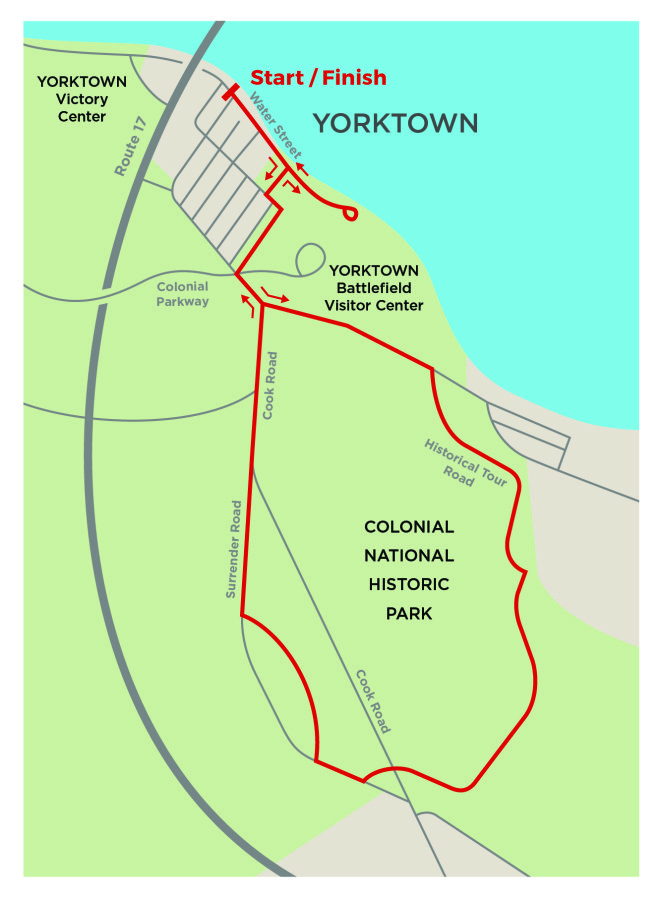 Check it out!
Parking

Please see the map below for other parking lots. 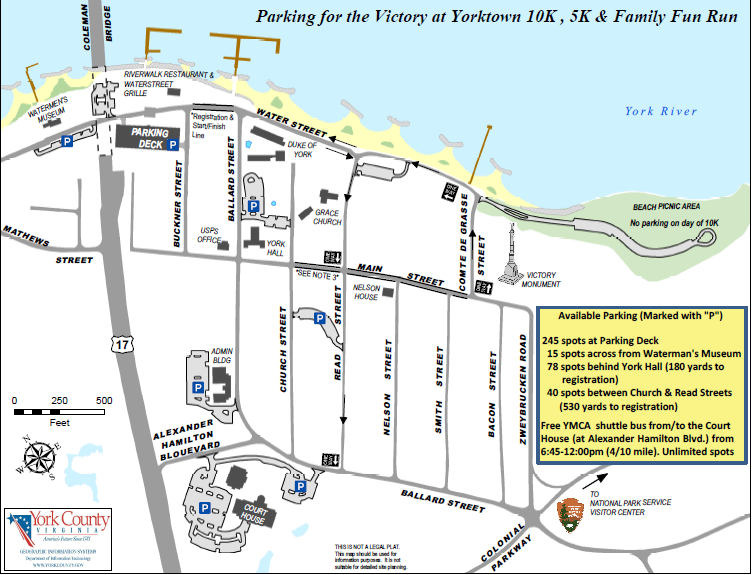 With the three major historical locations of Williamsburg, Yorktown and Jamestown all on the Virginia Peninsula, runners in 2019 will be able to focus their training and racing on the inaugural Historic Triangle Triple Crown, a series of three races, one in each of those cities, and all connected by the National Park Service’s historic Colonial Parkway.
The first race will be the fifth annual Victory at Yorktown 10K Run on Saturday, April 6, 2019. The second is the tenth annual Run the DOG Street Challenge 5K Run, finishing on the historic Duke of Gloucester Street in Williamsburg on Saturday, April 20, 2019. The third and final is the second annual Democracy Dash 10K Run at Jamestown Island, set for Saturday, August 24, 2019.

Starting in 2019 (the 400th anniversary for Jamestown of both democracy and slavery in English America), there will be a special Historic Triangle Triple Crown finisher medallion, along with individual race finisher medals for all three. There will also be special awards to the top three overall men and women, and top three Masters (ages 40-and-over) men and women, for those runners with the fastest combined times from all three races.

The 23-mile-long Colonial Parkway was built between 1930 and 1957 to connect the three Historic Triangle cities of Jamestown, Williamsburg and Yorktown, part of the National Park Service’s Colonial National Historical Park, which extends from the York River to the James River.

Jamestown, the site of the first permanent English settlement in the New World, in 1607, is also the location for the first democratic government in that New World, in 1619. In 1699, the capital of Virginia was moved from Jamestown to Williamsburg, where it remained until the 1780 move to Richmond, during the American Revolutionary War. Yorktown is the site for the surrender of General Cornwallis and the English to George Washington in 1781.

Runners now have the unique opportunity to have their own foot races in all three cities as part of the Historic Triangle Triple Crown, a combination of two 10K races (in Yorktown and Jamestown) and one 5K race (in Colonial Williamsburg).

The Victory at Yorktown 10K Run started in 2015, and utilizes the Yorktown Battlefield tour roads. The course is challenging, going by the historic Cornwallis Cave and up the Comte de Grasse Street hill at the start, and the Wormley Creek hill past the two-mile mark, but otherwise is a mostly flat, fast and scenic tour of the Yorktown Battlefield tour roads, going past Surrender Field and twice by the Yorktown Victory Monument, before a final half mile on Water Street along the York River.

The Run the DOG Street Challenge 5K began in 2010, and starts on Prince George Street of Merchants Square, then goes through the College of William and Mary campus, looping around the W&M University Center and football stadium, before crossing Richmond Road, going down Scotland Street to the final 1 ½ miles through the Colonial Williamsburg streets, past the Governor’s Palace and Capitol Building, and finishing the final half mile up the Duke of Gloucester Street (called by Franklin D. Roosevelt the “most historic avenue in all America”) to the finish line near the Bruton Parish Church.

The Democracy Dash race name and race date come from the fact that Jamestown was the birthplace of American democracy, and had the introduction of representative government to English America with the opening of the General Assembly in the summer of 1619. Slavery in America also started that summer, in August of 1619, and Jamestown will commemorate the 400th anniversary of each.

The Democracy Dash 10K at Jamestown Island start will be on the service road adjacent to the beginning of the Virginia Capital Trail (which goes from Jamestown to Richmond). The course takes a quick left onto the Colonial Parkway towards Jamestown Island, crossing over the causeway, with the James River on the right and Back Bay/Powhatan Creek on the left. Just past the National Park Service’s Historic Jamestowne Visitor Center, the race route takes a right onto the short loop of the Jamestown Island tour roads, with a two-tenths-of-a-mile out-and-back section on the long loop to make the exact 10K distance. After the Island loop, the course returns the same route to a finish in front of the Billsburg Brewery at the James City County Marina. The course is fast and totally flat, and outside of the causeway, is a wooded, shaded, scenic route with wetlands crossings on wooden bridges, unsurpassed in historical beauty.

All three Historic Triangle Triple Crown races are part of the 2019 Colonial Road Runners Grand Prix, a series of 20+ races in the Williamsburg/Yorktown area, and all three are also part of the 2019 Hampton Roads Super Grand Prix, a series of 16 races organized by the three major Hampton Roads running clubs—the CRR, the Peninsula Track Club and the Tidewater Striders.

For further information on any of the three races, or for the Historic Triangle Triple Crown, contact Rick Platt of the Colonial Road Runners at 757-345-1431 or 757-229-7375, email: rickplatt1@juno.com. Website: www.colonialroadrunners.org

Join this event and invite your friends on Facebook.