WHO:  Runners of all ages.  Walkers are also invited to participate using the same course. The Spring-Ford High School cross country course, which is on the high school grounds, will be used for this event.

WHAT:  Dragon Run for Courage 5k run/walk will benefit The Conor McKenna Foundation and Jake's Dragon Foundation. Conor and Jake both  fought pediatric cancer  in their teenage years. Their fight and courage are the basis for  their respective foundations. The funds raised will provide a scholarship in Conor's name. In Jake's  memory  local pediatric cancer families will be supported through gift cards as well as funding research for pediatric cancer.

Results from the live and virtual races are listed here:

The Conor McKenna Foundation and Jake’s Dragon Foundation are joining forces to host what was previously known as the Run for Courage 5K. The 2nd annual Dragon Run for Courage 5K will split the proceeds evenly between both foundations.  It is our hope that by combining our efforts, we can raise more funding to further increase pediatric cancer awareness. Our newly branded event will be held on Saturday, October 10, 2020 at 9:00 a.m., at Spring-Ford High School, Royersford PA.

The Conor McKenna Foundation is a Non-Profit Organization created to raise money to fund a scholarship to be given to a student at Spring-Ford High School on a yearly basis. The award winner will be a student who has shown tremendous courage and perseverance when faced with some adversity in their life.  The foundation has awarded eight scholarships the last six years to courageous graduating students at Spring-Ford High School.
The foundation was started after Conor McKenna passed away on March 5, 2011 at the age of 15, after a 19-month battle with a rare cancer.  He was a sophomore at Spring-Ford High School and loved sports.  He showed such courage during his illness that we want to continue to award a scholarship in his name for as long as the foundation continues to raise money to do so.

Jake’s Dragon Foundation was started by the McHugh family after the loss of their youngest son, Jake.  Jake loved to build and had an imagination like no other. He could often be found on the sidelines of his older brother’s ball games creating amazing scenes.  He especially loved dragons and felt they protected him during his treatment.   Jake’s Dragon Foundation supports local pediatric cancer families through gift cards and funding much needed research. Total money raised towards research is $75,000!

There are many initial costs to hosting such an event. We are searching for sponsors to donate money to assist in these expenditures.  To learn more about sponsoring please contact Holly Beauchamp at hbeauchamp102@gmail.com

DONATIONS:  Any donations to either foundation can be made out to the Conor Mckenna foundation. 162 Buckwalter Rd, Royersford Pa 19468

The race will be chip timed using a bib chip system.   Bibs will be distributed at the packet pickup.   All runners must cross the mat at the finish line with their chip properly attached to front of their body.

Overall Winner Trophy and  gift card will be presented:

AGE GROUPS medals will be awarded to the age groups:

Award Ceremony: There will not be a physical award ceremony on race day. Awards will  be available for pickup the following week.  Location & details TBA

The run starts and finishes at the Spring-Ford High School.   There will be water stations at the finish line.

For a map of the course, please click on the link below:

*This is rain or shine event

Can't make the race?? But believe in our cause and still want to be a participant? Sign up as a Virtual Runner/Walker. Find a measured 5k course in your area (most parks or communities have one) Start your watch at the start, when you reach the finish, stop your watch and record your time. Send us an email containing your time by Sunday morning October 11th and you will be included in the Website results. There are NO awards given , but you will see where you would have finished, if you were actually at the race!! If you would like  a tee shirt please indicate the size and make sure we have your address either on the mail in or the online registration. Thanks for being part of our day!Participants not able to make packet pickup prior to the race may pickup their packets at the race during the times listed on the Event Schedule.

Participants may pickup their packets at the race during the times listed on the Event Schedule, or virtual runners can have their goodie bag mailed to them.

Virtual runner will receive an email from result@secondwindtiming.com by noon on Saturday.  The email contains your results submission link.  Complete your race and submit your results by Sunday 6pm to be included in the results.

Place
350 South Lewis Road
Royersford, PA US 19468
Race Contact Info
If you have any questions about this race, please contact the race director at
Sponsors
Sponsorship

All donors will be recognized on race day via a sponsor board and company link located on each foundation’s website.  In addition, the company name or logo will be placed on our race T-shirts (all donations must be received by September 1st in order to have your Company name on the shirts if the donation is above $100) Please email a company logo to be used for the T-shirt to the e-mail below. 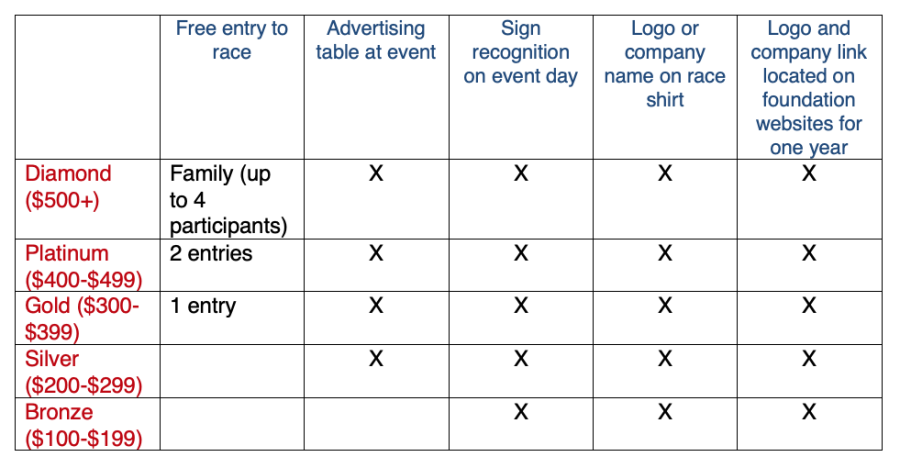 *For a sponsorship form, please click on link below.