HISTORY
RIDEYELLOW is an Infirmary Health charity bike ride held annually on the Saturday before Father's Day. It was founded in 2007 by Ann White-Spunner and Mary Trufant to raise awareness of cancer and to draft grassroots support for their mission of inspiring and empowering people affected by cancer. Since its inception, RIDEYELLOW has donated more than $538,000 to various cancer charities!

Here is a little history of how RIDEYELLOW came to exist….

Mary's mother, "J", passed away from cancer in 1998. Mary knew she wanted to do something in honor of her mom. Her chance came when the Lance Armstrong Foundation hosted its annual Ride for the Roses fundraiser in 2005 on the anniversary of her mom's death. Ann and Mary raised $3500 for the charity. In 2006, a dear friend, Sharon Meeks received her second diagnosis of breast cancer. Ann and Mary knew immediately they had a call to action, "cancer doesn't take a break and neither can we!" They raised over $20,000 for the Lance Armstrong Foundation and headed to Philadelphia to participate in the first ever LiveStrong Challenge. The "charge" became even more personal in 2007 when Mary's father, Charles, was diagnosed with Stage 4 cancer. Ann and Mary were also introduced to 13 year old Krisanna Roberts, who is St. Jude's longest survivor of AT/RT - a rare childhood cancer. The goal was set to raise $30,000 and everyone was challenged to dream bigger. Ann suggested that a charity bike ride be started in lower Alabama! RIDEYELLOW WAS BORN! Sadly, Sharon passed away in April and Charles passed away in May of 2008, and Krisanna in November of 2009 but not before they witnessed the outpouring of support for RIDEYELLOW. 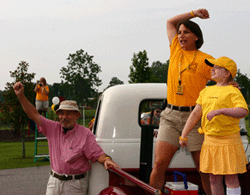