The "Clemson 8" Bataan Death March Challenge is open to the general public. We are looking at hosting an in-person race on Sat., March 12, 2022, along with a virtual race, March 12-19, 2022. You can complete your own walk, run, bike, hike, or swim on your own course - in your own town.  And, you can complete it in one day or throughout the eight-day period. Due to the pandemic, shirts could still be in short supply come February or March.  Please consider registering as soon as possible so we can fulfill everyone's requested shirt size.  Your participant packet will be mailed in mid-February along with your race medallion and bib number. There will be no prize money awarded to the top finishers if there is an in-person event.

100% of the proceeds will benefit the Clemson University Military Affiliated students via an endowment to send a group of these military students to compete in the 2022 and all future Bataan Memorial Death March Races at the White Sands Missile Range in New Mexico. The Inaugural Challenge this past March raised $56,000. This year's goal is to raise $50,000.

On April 9, 1942, six Clemson alumni became prisoners of war with tens of thousands of their brothers-in-arms when American troops who had been fighting in the Philippine theater of WWII were ordered to surrender to the Japanese. They were marched North some 70 miles by their ruthless captors in what would come to be known as the Bataan Death March, one of the most notorious war crimes in history.  Seven other alumni were also captured on neighboring islands during World War II.

Already weak and starving from months of intense fighting and illness, the POWs’ were herded with other sick, wounded and starving soldiers through the searing heat of the Philippine jungles. Thousands died. Those who survived the march then had to survive for years in the inhumane and brutal conditions of Japanese prisoner-of-war camps, and the sinking by our own Navy of unmarked prison ships trying to steal the POW’s away to the mainland towards the end of the war. It is impossible to know the exact number, but it is estimated at least 57 percent of the captured Americans did not survive the war – more than 11,500 souls — which is considered a very conservative number by most experts.

Colonel Skardon, 104,was the last living member of this illustrious group. He was well known as the only survivor of the real Bataan Death March who walked in the annual Bataan Memorial Death March (BMDM) at White Sands Missile Range, N.M., one of the toughest and most popular “ultramarathons” in the world. The event has become a pilgrimage for veterans, active-duty military members, supporters, the few remaining survivors, and family members of the men who perished in the march and POW camps.

Colonel Skardon had walked in the BMDM 12 times, most often a distance of 8.5 miles, beginning in 2007 when he was 89. In 2019, at 101, he walked more than three miles through the desert to honor his brothers-in-arms who did not return from the war. He considers it his duty. He was on his way to walk again in 2021 when the event was canceled due to the pandemic.  In response, the "Clemson 8" Challenge was created by a team of students, veterans, alumni and friends so Colonel Skardon could continue his pilgrimage from his home in Clemson.  The 8 represents the annual miles that Colonel Skardon walked each year to honor those who gave the ultimate sacrifice for our country in one of the most brutal wartime events in history.

After registering for the "Clemson 8" Challenge, everyone is encouraged to continue their training and participate in the 2022 in-person or virtual edition of the 33nd Annual Bataan Memorial Death March at https://bataanmarch.com/

For more information on those who have made the ultimate sacrifice for our country from Clemson A&M College and Clemson University, visit the Clemson University Scroll of Honor website: https://soh.alumni.clemson.edu/

To submit results for the virtual challenge, simply follow these steps:

Place
To be determined
Clemson or at your own location, SC US 29634
Race Contact Info
If you have any questions about this race, please contact the race director at
Race Website

Additional race information can be found at https://go-greenevents.com/. 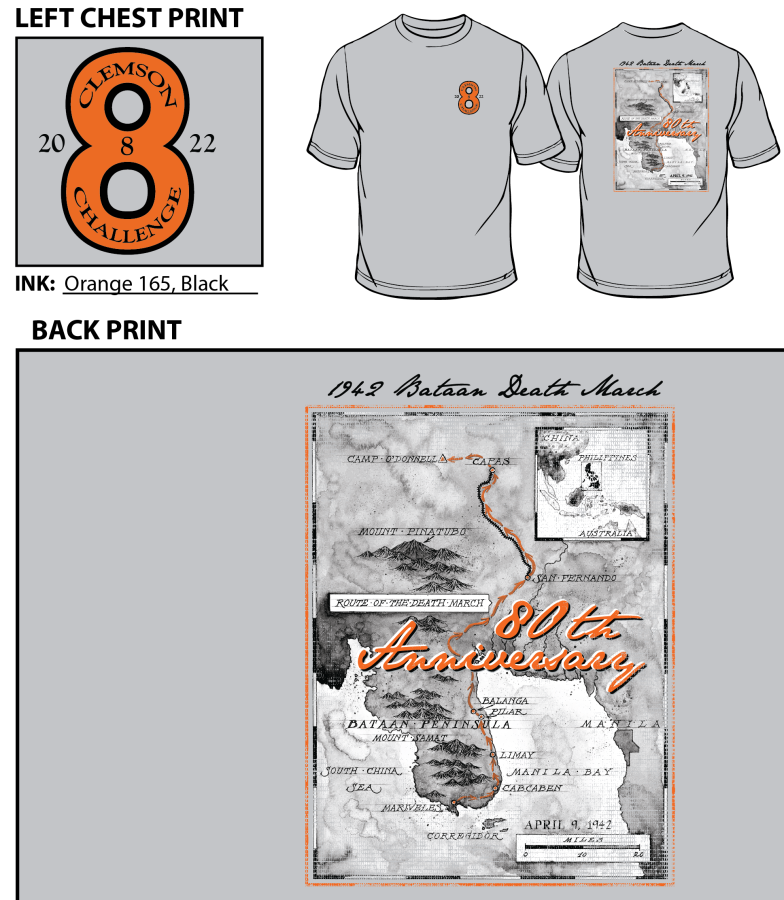 The wooden medallion symbolizes the POW/MIA Missing Man Table ceremony that is a dignified and solemn moment in many formal dinners and other occasions. There have been many different narratives written for the ceremony, but the symbolism is quite constant. It involves a table, usually set off to the side, with a single chair. The table is set with a white tablecloth, a single candle, a book of faith (optional), an inverted glass, and a single red rose in a vase, around which is tied a yellow ribbon. Set at the table is a plate containing a slice of lemon and a small amount of salt.