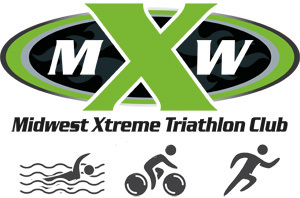 Midwest Xtreme Triathlon Club's purpose is to promote and encourage triathlon activities (typically associated with combined swimming, bicycling, running) for recreation, physical fitness, or as a competitive sport, through the education of the community on the benefits of physical fitness and amateur sport.  We are affiliated with the USA Triathlon Organization.  Throughout the year we have group training and coaching, host lecture and social events, assist with races, and encourage triathlons as a means of physical fitness and amateur sports  -  whether you are training for your 1st triathlon or 101st.

The MWX Triathlon Club was originally founded in 2007.  Members age groups range from 16 to 82 years old, age-group & national champions, 2 or 3 member teams, or achieving a "one n done" triathlon goal - Sprint, Olympic, Half IronMan (70.3), and Ironman (140.6) distances. We currently have over 75 members from the surrounding Cedar Rapids and Iowa City areas.  We all have one thing in common - our love for multi-sport with a passion to share fun times and experiences with anyone who wants to join us!

2022 promises to be another great year and we welcome you to come be a part of this absolutely thrilling sport. You will meet some of the most motivating, enthusiastic and supportive people you’ve ever known!

Membership in the MWX Triathlon Club is open to all irrespective of your age, ability, or experience. You do not need to be an accomplished triathlete, just someone who is interested in participating in triathlons - or just the activities associated with triathlons. MWX is a non-profit volunteer organization with low yearly fees supporting the basics and includes these benefits:

$25 - PreSeason 2023 annual membership rate opens on 12/3/2022 and goes through 1/31/2023.
This year's preseason entry Includes a chance at a drawing for a free entry to Pigman 2023 or a chance at a second drawing for a $50 gift certificate to Northtowne Cycling.  Those registering in the preseason are also eligible for the "Start of Season" and "Regular Season" drawing.

$30 - Start of Season 2023 annual membership rate runs from 2/1/2023 to through 3/31/2023
At this point, it's too late to be included in the free entry to Pigman 2021 or $50 Northtowne Cycling drawings.  However, you are still in time for other free triathlon entries as they become available. You could also be eligible for the "Regular Season" drawing.

Includes all of the club's benefits.

$20 - Youth Regular Season annual membership rate is for the whole year.
Depending on registration time, youth will be eligible for the drawings as well.

What is triathlon? Triathlon is a swim-bike-run race. It is one of the fastest growing sports in the country. The United States just earned its first olympic medal in triathlon this year at the 2016 Olympics with Gwen Jorgensen’s stellar performance.

What are the distances of the race? There are lots of distances offered from Sprint all the way up to Ironman! The official collegiate distance is Olympic/Standard Distance which is a 1 mile swim – 24.8 mile bike – 6.2 mile run. There will be options for athletes to do Sprint Distance (0.5 mile swim – 12.4 mile bike – 3.1 mile run) racing throughout the year if you’re not ready for Olympic Distance yet!

Is triathlon a collegiate sport? Yes! The NCAA recently named triathlon an “emerging sport” for women in 2014. However, Iowa State’s women’s team will remain a club sport for the foreseeable future.

Who do you compete against? Are there conferences like in high school sports? Yes, we are in the Midwest Collegiate Triathlon Conference (MWCTC). Our conference has about 15 teams from Iowa, Minnesota, Wisconsin, and Missouri. Every region of the country has it’s own conference.

Swim
I’m not a great swimmer… Can I still do triathlon? Of course. You can use any swimming stroke you are comfortable with including the doggy paddle. Feel free to ask an exec member for tips to improve your stroke during swim practices.

Bike
Are helmets required? YES! It’s a DQ in a race if you are riding or touching your bike without a helmet. We also require them for practices. We have loaner helmets available.

I don’t have a bike… Can I still join the club? Absolutely. We have a number of club bikes and equipment that are available to our members. We have a variety of sizes that can fit someone 4’9″ and 90 pounds to someone 6’9″+ and 390 pounds.

I have my own bike but don’t have a place to store it. Do you have storage for members? We can store bikes in our club locker in State Gym. Certain club officers have keys and will open up the locker for practices and races.

I only have a mountain bike. Can I still compete? Sure, it’s allowed, and there are usually a couple at every race. No recumbents, trikes, tandems, or beam bikes, though. Anything else is likely fine. Tri bikes aren’t necessary, and opinions vary wildly based on a person’s needs and riding style. The club’s loaner bikes are standard road bikes, but a few members own tri bikes.

Are aerobars allowed? Yes, they are allowed, but certainly not necessary. They do have a learning curve attached to them. Most people who get used to them prefer them.

You must be a member to view this content.