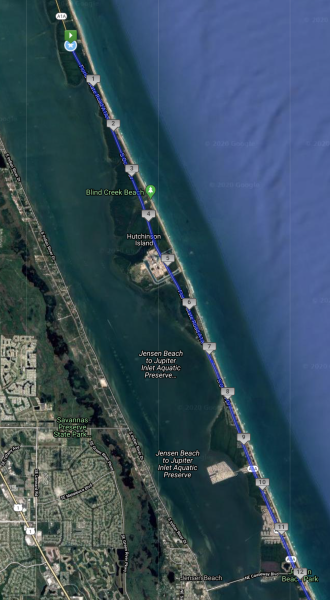 Hutchinson Island is the perfect place to strap on our running gear and begin our journey to Key West during the Florida Virtual 500K Challenge.

We are facing south on two-lane Florida State Road A1A, with thick mangroves on both our right and our left. Beyond the mangroves to the East is a narrow strip of unspoiled beach on the Atlantic Ocean. To the west is Vitolo Family Preserve North, a 64 acre wetland Preserve, basically a strip of land between the Indian River Lagoon and a mangrove estuary.

Before we get underway, we douse ourselves with mosquito repellent as the still water where the mangroves thrive is a natural habitat for the pesky insects. We countdown our start in unison, “3...2...1...Go” and we are off to Key West.

Hutchinson Island is a barrier island in the middle of Florida’s Treasure Coast, stretching a narrow 23 miles between the Atlantic Coast and the Indian River.

Much of the island is left natural as the day it was when discovered, making it a wonderful sanctuary for the wildlife.

And of course, running.

Though we were tempted to run on the sandy beach, it is ”turtle season.”

From April through September Hutchinson Island becomes one of the world’s most important nesting areas for loggerhead turtles. There are 5 species of sea turtles that migrate to Hutchinson Island every year - the nests are carefully monitored and well marked on the beaches.

Regardless, we have miles to run on this sparsely populated portion of the island - there are about 20 homes in the first four miles of our run, all on the beach with the Atlantic Ocean just feet from these beautiful homes.

Ocean views are rare for us as we click off the miles, but exceptional on this barrier island, which is incredibly flat.

Soon after our watches signal 4 miles completed, we notice two unusual, but unmistakable structures ahead on our right - nuclear reactors.

Signs let us know this is the St. Lucie Nuclear Power Plant. We later learn this plant has been in operation since 1976 and generates enough electricity to supply the annual needs of more than 1 million homes.

Just across the Indian River are the quaint communities of Stuart, Jensen Beach and Fort Pierce - all three are rich in history and culture, and offer great local dining, shopping, and local artist’s galleries. All of which need electircal power...

Still, it seems out of place in the midst of so much natural beauty.

The miles seem effortless on this extremely flat and minimally used road. Just after we cross past the 6 mile mark, we come across a small community of town homes. We wonder out loud if these residents know if they are living in paradise...

Just before mile 7, Hutchinson Island becomes VERY narrow and we find ourselves running along S. Ocean Drive, which provides our first significant views of the Indian River - what a beautiful sight on a beautiful day!

And just as quickly, the island becomes wide and we once again have mangroves on either side. What started out as sparsely populated, there are now more homes, hotels and businesses in this southern part of this island. 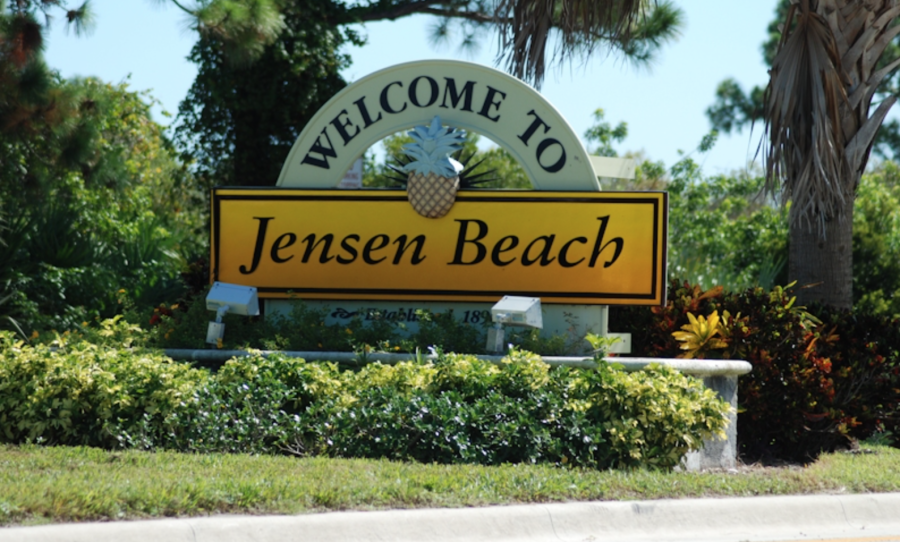 Jensen Beach Park appears to be the largest of the public beaches we have seen so far, with ample parking, facilities, and a narrow sliver of beach.

We have now run 12 miles, a great start to this long adventure, so it’s time to relax and recover on the beach and in the Atlantic Ocean.

Conclusion: While Hutchinson Island is probably one of the most beautiful places in Florida, it may also be one of it’s best kept secrets.

The beaches are not overcrowded and most times you'll find you have the beach to yourself. The people are all friendly, courteous and very laid back. You will often see people strolling the beach with a glass of wine.