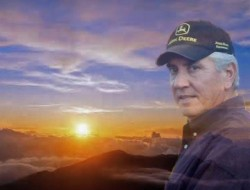 Jim Gilbert loved the outdoors. He was an avid fisherman and hunter.  He was a tobacco farmer and took great pride in every year's crop.  He spent years coaching softball and basketball. He was a husband, a brother, a grandpa, an uncle, a devoted father to three girls, and a wonderful friend.

In the fall of 2012, Jim started complaining of stomach discomfort and digestive issues. Being a man who never complained and who was never sick, his family immediately got him into a doctor's office.  Seven long weeks later he was diagnosed with cholangiocarcinoma, a rare form of bile duct cancer. He fought with every ounce he had for 8 months. On May 21, 2013, he passed away surrounded by his loving family.  It was during the 8 months that his family heard about The Danville Cancer Association.  This organization helped with prescriptions and with gas mileage as he traveled back and forth to Duke.

Team Gilbert has participated in Bridge to Bridge for the last 3 years.  We are so thankful for the help provided by The Danville Cancer Association and we are so honored to be able to walk/run in Jim's memory.

“You beat caner by how you live, why you live, and in the manner in which you live.” --Stuart Scott