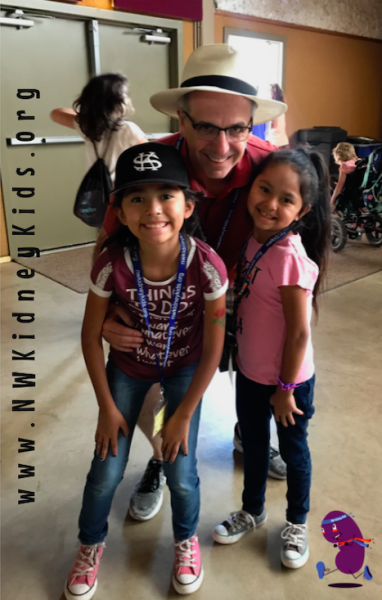 Savannah and Carissa (pictured on the right with Dr. Rozansky) were born 10 years ago, little did we know what was in store for us with these twins. Carissa was born first and Savannah followed 10 minutes later. Carissa had a collapsed lung which took her to the NICU immediately after birth. The doctor said, “Her cry was too big for her little body” and now that I think about it, it makes total sense.  It wasn’t too long before they realized something was wrong with her kidneys. After some X-rays and blood work she was transferred to Doernbecher’s Children’s Hospital. There we received the actual and worst news; Carissa was born without kidneys. We were devastated, would our daughter make it? Was that even heard of before?  How would she survive?  We soon met Dr. Rozansky who explained to us how medically complicated she was and how Savannah, her twin, had saved her life. For some unexplained reason both of their sacs in the womb had holes/windows, which allowed Savannah to share her amniotic fluid with Carissa- who otherwise with having no kidneys, wouldn’t have made it.

Her journey would begin the next day with surgery at 2 days old to begin her long road on dialysis. She was on peritoneal dialysis for two years and switched to hemodialysis due to a very bad infection. She continued on hemodialysis until 2013 when she received a kidney transplant. Carissa’s transplant has been life changing for our family. From being admitted for months in a row; to driving three times a week to dialysis in Portland (110 miles away from home); she now goes to school and enjoys sports.

NW Kidney Kids Camp is what she most looks forward to every year. I remember our first year, we were a little nervous and not sure what to expect. We were walking to dinner when Carissa saw a little boy playing by the dining room, she pointed at his g-tube and said look mom he’s just like me! She felt so excited seeing someone who she could actually relate to. We knew then it was something we always wanted to be a part of. Meeting other families who have been through the same road as we have is something that has helped us manage our daughter's life-long condition.

Thank you Elizabeth (Carissa's Mom) for sharing a slice of your daughter's kidney journey.

To help families like Carissa’s please join us on September 22, 2019 to Strut YOUR Kidney.