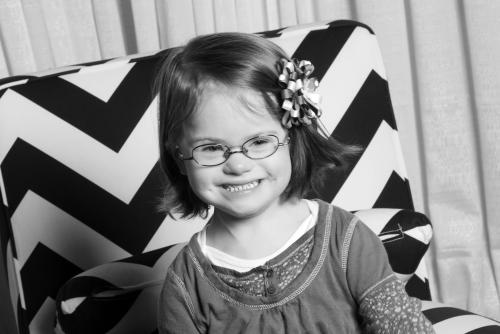 If you would like to run in honor of Star Naomi, you will select her team when registering and your team t-shirt color is VIOLET. Here's Naomi's story.

Naomi was born on May 11, 2009, with cardiac and respiratory complications associated with "Trisomy of some kind".  She spent more than a week in the special care nursery, during which time she was diagnosed with four heart defects, as well as Down syndrome.  Due to feeding issues and poor weight gain, she was monitored closely by her pediatrician.  The growth of her head soon became noticeably more rapid than the rest of her body.  At seven weeks of age, she had an ultrasound done through the fontanelles of her skull.  During this appointment, we received the diagnosis of a brain tumor and were told to take her to the local children's hospital immediately.

According to the neurosurgeon, Naomi's head couldn't have gotten any bigger.  The medical team was stunned that Naomi was still nursing like a champ and that she hadn't had any seizures.  The tumor caused a blockage of the normal flow of fluid within the brain and spinal column, which created an excessive amount of pressure inside Naomi's head.  This made her unstable for the tumor resection that she needed, so a drain was placed first to remove all of that built up fluid.  The next day, Naomi had the tumor resection.  She was kept under anesthesia, or heavily sedated, for four straight days.  Upon waking her up, I remember how relieved the neurosurgeon was to find that Naomi was able to move all four of her limbs.

Naomi had a few follow-up surgeries to place drains and shunts, one of which remains in her head to this day.  She has not been hospitalized since September 29, 2009.  She has had no recurrence of the tumor thus far, and is now monitored every other year with an MRI and annually through the Neuro-Oncology Clinic.

Naomi's brain tumor caused quite a bit of damage including partial paralysis on her left side, partial blindness on the left side of each eye, cortical visual impairment, and cognitive impairment.  In addition to these, Naomi also has many of the most common conditions associated with Down syndrome, including nearsightedness, low muscle tone, loose ligaments, reflux and constipation, and developmental delays.  All four of the heart defects that she had at birth resolved on their own by the end of her birth year.

To help Naomi learn to speak, walk, write, etc., she participates in a multitude of therapies each week.  She receives physical therapy on land and in the water, occupational therapy, feeding therapy, speech therapy, assistive augmentive communication (device) therapy, music therapy, and also participates in classes with AIM for the Handicapped on land and in the water.   In addition to all of the therapies, Naomi also takes art classes with our local park district, plays TOP soccer, goes to dance class (hip hop and ballet), and plays baseball in the Miracle League.

Now almost ten years old, Naomi is one seriously amazing little girl!  She is sweet and very outgoing, often grabbing hold of the closest available hand to shake it or dance.  She is a blossoming homeschool student, demonstrating information retention and new skills regularly.  She is determined to be mobile, crawling or climbing at every opportunity.  Naomi is actively involved in our local community, homeschool community and numerous social events.  Most importantly, she is a treasured member of our family.

To run In Honor of Star Naomi, click here. 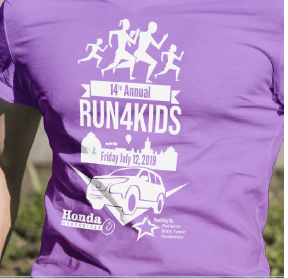