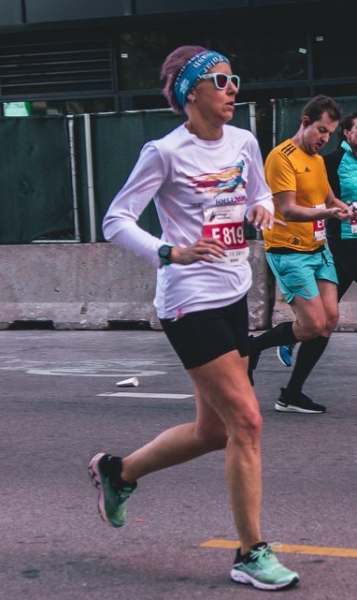 Full disclosure: I used to be support for my husband’s half-marathons, and he finds great amusement in reminding me that I always told him that I might run casually but, “I’m just not interested in running long distances.”

Then in July 2014, he asked me to run the Chicago Rock ’n’ Roll Half Marathon with him, and that was the end of that! I ran about a dozen half marathons, until he jokingly suggested that I should try a full marathon. Never one to back down from a challenge, I found a training program online and ran long runs by myself on the 606 and Lakefront Trail through the winter and into spring. In what seems bizarre and foreign now, given Houston’s general climate, I ran my last solo pre-race 20 miler in early April snow flurries.

In mid-April 2016 we moved back to Houston, and shortly after that I ran my first full marathon in Nashville. (Hills, y’all. So many hills.) I wanted to do it again, but I didn’t want to train for it alone, so I looked around for a running club, and found Runner’s High. Joining this group has made all the difference, and has kept me running through multiple Houston Marathons, The Woodlands Marathons, the Chicago Marathon; if they hadn’t been post-poned, Boston and Marine Corps Marathons would have been completed in 2020 as well.

I couldn’t have done it without the support and comradery of the friends I made here at RHC, and I’m looking forward to a new season, however different it may play out due to the current circumstances.

Photo taken at Mile 9 of the 2019 Chicago Marathon by Omar Ulises and Emilia Benton.